Want to know who players where? Check Horn Section Listings - it currently lists 1919 members of orchestral horn sections in 71 countries worldwide, "from Albania to Yugoslavia!" See also the links to horn section personnel given by Music Chairs.

Horns Across America - a blog by Jessie Pinkham that is an honors project at the U of Cincinnati Honors College.

Horn Profiles is a new site; not many profiles listed as yet, but it promises to be a place where people can locate horn players and teachers worldwide.

Check out "Performers" from Kayla Nelson's hornhistory.com site - this timeline gives birth & death dates, and micro-bios for many famous horn players in history. Brief notes, but a comprehensive list of important historical players, mostly of the 18th and 19th centuries.

The IHS site has a list of Past Great Players with short bios.

Principals of Major American Orchestras - Scroll down a bit to #4 to find links to lists of all the horn players (as well as every other instrument) and principal horn players in these orchestras: Boston, Chicago, Cleveland, Philadelphia, Metropolitan Opera, St. Louis, San Francisco.

See also Wikipedia's List of Horn Players (and you can add to it!)

Dennis Brain (1921-1957) Wikipedia article on D.B. Time magazine article "Young Man with a Horn", July 6, 1953
The greatest of them all. Check out the Dennis Brain discography and the review of Robert Marshall’s book “Dennis Brain on Record." Video (YouTube) of Dennis Brain discussing and then performing the Beethoven Sonata Op. 17, part 1; and Part 2.

Joseph Ignaz Leutgeb (1745-1811)
We all owe Leutgeb (pronounced Leitgeb in Viennese dialect) an immeasurable vote of thanks - it was for him that Mozart wrote all his great works for horn.

Franz Strauss (1822-1905) [IHS bio]
Father of Richard Strauss. F.S. was the most famous hornist in Germany in the 19th century. There are many great stories about the man, especially concerning his run-ins with Wagner & Co. Check out the photo’s of his horn, before restoration and after. Also his mouthpiece. Free scores to 3 of his pieces available at IMSLP.

Barry Tuckwell
Australian Tuckwell has had a long and brilliant career as an orchestral horn player (13 years as principal horn of the London Symphony Orchestra) and virtuoso soloist. He is the most-recorded horn player ever. Listen to the 31 min. podcast interview: "A Life with French Horn." There is also a feature on him in the Live Performance Australia Hall of Fame.

Alan Civil (1929-1989)
Distinguished British hornist who became principal of the Philharmonia when Dennis Brain died in an auto accident in 1957. Spent many years as principal of the BBC Symphony Orchestra. Many solo appearances and recordings (including the Beatles' Revolver). See also “Horn Solo/Beatles” in Performances.

Hermann Baumann
Baumann has been an eminent virtuoso and teacher since he won First Prize in the prestigious Munich competition in 1964, on valve horn, natural horn, and corno da caccia.

Philip Farkas (1914-1992)
The godfather of horn playing and teaching in America (depicted here playing a Vienna horn...), author of The Art of Playing the French Horn.

Frøydis Ree Wekre
Frøydis - that's all you need to say and everyone knows who you mean: one of the greatest horn players and teachers of all time.

Valery Polekh
Article by Y. Usov about the great Russian hornist for whom the Gliére Concerto was written.

Frank Lloyd
Warning: your jaw is in danger of becoming unhinged when you hear him play! Effortless, beautiful, musical, astounding playing!

Radovan Vlatkovic - Croatian-born R.V. can charm you with his extraordinary musicality and supernatural technique and he is equally charming and fluent in interviews in Croatian, English (he lived in Wisconsin from age 6 to 8), Spanish, German, and probably a couple more. A man of the world and for all musical seasons!

James Chambers - James Chambers was principal of the NY Philharmonic for many years; he was also an editor of many classical pieces for horn and had series of orchestral excerpts published by International. This is a YouTube video; the audio is Chambers playing a Corelli transcription; the video consists of a succession of snapshots of Chambers.

Anton Horner - audio recording from the first IHS workshop in 1969. Interview with Horner by James Chambers.

Valeri Polekh - and the history of the Glière Concerto, by Y. Usov

Famous People Who Weren't Known as Hornists, but Also [allegedly] Played the Horn (at some time or other) 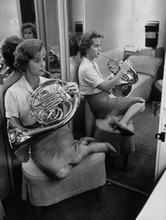 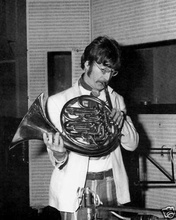