Kickstarter - “A new way to fund & follow creativity.” “…a new form of commerce and patronage.” Kickstarter is a place to support creative projects of all kinds or to start a project and ask for support from others. A great idea for the arts in the 21st century!

Read advice from John Ericson and Bruce Hembd on the subject: Seven Tips for Cadenzas, Improvise your Cadenza, Want to Hear Some Mozart 3 Cadenzas?, Quantz on Cadenzas

How to Compose a Cadenza - eHow article

It's not horn, but an amazing video of a paradigm-busting panoply of other ways to do a cadenza nowadays....

Composition and Improvisation on the Horn - article by Evan Grulke

Learn to Compose Music - "Information for learning to write songs and improving writing and improvising abilities."

Improv Games for One Player, by Jeffrey Agrell, a portable (55 p.) book of nonjazz improv games for one player for use in warm-ups and working on technique and musicianship. 50 p. (also published by GIA). Contains some games from the big book and some new previously unpublished improv games for 1 player.

"Do Schools Kills Creativity?" - Sir Ken Robinson makes an entertaining and profoundly moving case for creating an education system that nurtures (rather than undermines) creativity.

Elizabeth Gilbert: A different way to think about creative genius

"Compositional Trends in Solo Horn Works Composed by Horn Performers (1970-2005): A Survey and Catalog" 109 p.
Downloadable DMA thesis by Kim Rooney. Abstract: A survey of solo horn works composed in the late twentieth century exhibits the strong influence of horn performers on the instrument's expanding solo repertoire. Hornists such as Jeffrey Agrell, David Amram, Paul Basler, Randall Faust, Lowell Greer, Douglas Hill, Lowell Shaw, Jeffrey Snedeker, and many others have contributed worthwhile new works to the horn repertoire. These works take advantage of recent compositional trends in order to showcase the full spectrum of musical possibilities available to the modern hornist. The goal of this study is to draw attention to the large body of horn solo repertoire that has been composed by hornists from 1970 to 2005, to explore the technical challenges it poses, to consider common trends among the works of several hornist-composers, and to encourage performance of this repertoire. 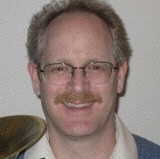 Matt Shevrin is a highly creative hornist and composer who has been coming with original sounds and settings for the horn for decades.

Pip Eastop
British hornist Pip Eastop is one of the most brilliant and creative hornists anywhere, and this delight of a site is evidence of it.

Martin Mayes is a Scotsman who has and worked in Italy since 1982, where he has performed and recorded the horn in new ways, including with the Instablile Orchestra, the "best Italian Jazz Group of 1995." 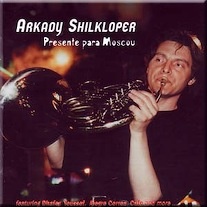 Arkady Shilkloper
Arguably the most creative horn player, ever. If you ever get a chance to catch his solo act (loop & effects pedals, alphorn, fluegelhorn) or see him when he plays with the Moscow Art Trio or Pago Libre, take it! "Shilkloper and his bass player swing like nobody's business. He rips and riffs and goes places that horn players aren't supposed to go without a net, map, seat belt, crash helmet, overhead air support, and a note from their mothers. And he does so with extraordinary ease and musicality. I think maybe nobody ever told him "Jazz playing on horn is very difficult, and probably not natural or perhaps the phrase does not translate into Russian. I'd walk a camel a mile to hear this guy." -Jeffrey Agrell, The Horn Call, 1988

Dani Reynolds Custom Painted Mutes
Dani Reynolds is a creative music man-for-all-seasons. Among his creations is a mute-painting service. Contact him to discuss the details of what you would like your transform your current mute into, or leave it to his imagination to come with something amazing and unique. Dani will also decorate other musical objects, such as your conductor's baton or percussion instrument (examples on his web site, which also shows how to make an inexpensive hand strap for your horn, and offers his compositions for sale).