Could not retrieve the oEmbed resource.

The University of Iowa Campus and Iowa City

Iowa City is one of the top college towns in the nation. The campus and town are very attractive and there is always an amazing number of events of all kinds going on – everything from big world class musical and theatrical acts to Friday night jazz bands outdoors on the Ped Mall downtown. Iowa City has the safe, comfortable and manageable feeling of a small town combined with the activity and choices of a big city. The university is integrated with the downtown. It’s a great environment in which to live and work. Check out the Wikipedia article on Iowa City.

Outside Magazine calls Iowa City the Best Town in the Midwest (and one of the 30 best in America), home to famous writers, Prairie Lights bookstore, and "everything from Ethiopian cafés to grilled-cheese stands." The Utne Reader calls it one of the "Ten Most Enlightened Towns in America,” the Milken Institute ranked (2003) Iowa City the No. 1 small metropolitan area in economic performance and job creation, and Editor & Publisher magazine chose it as the number one place to live in the country. Kiplinger’s Personal Finance magazine ranked I.C. as the 2nd healthiest city in the U.S. (thanks to UI Hospitals and abundant recreation areas), Men’s Health magazine just named Iowa City the “Healthiest Town in America”. Men’s Journal said I.C. is one of the top ten “healthiest, safest and sexiest place to live in America (2003); National Geographic Adventure magazine calls I.C. "one of the 50 Best Places to Live and Play," the Wall Street Journal and Business Week both say I.C. is one of the best places to retire, Fortune lists it as having the highest percentage of college graduates of any city in the country, and Forbes magazine ranked it 2nd in a feature (2008) on the best smaller metro towns, 8th as an Up and Coming Tech City (2008), and also called it the 10th smartest city in the nation. UNESCO designated Iowa City as the world's third City of Literature (2008). I.C. was ranked #29 in Best Green Cities, USA Today found it to be the 3rd most-educated metro area in the country.Expansion Management called Iowa City the 3rd best (out of 331) Metro area for Livability (2004). In the Insider's Guide to Colleges said that the town offers "a picturesque campus, a thriving social scene, and the excitement of Big Ten athletic teams." The Atlantic magazine listed Iowa City as #12 of “America’s Top 25 Cities for Recent College Graduates” (2011). 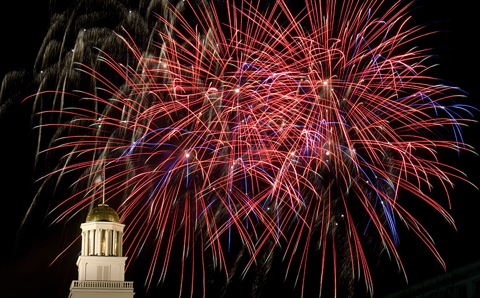 You get the idea. Iowa City is a great place to live.

But don't take their or our word for it. Come and investigate the town for yourself. Ask any alumni - anyone who has attended college at the U of I has loved it. 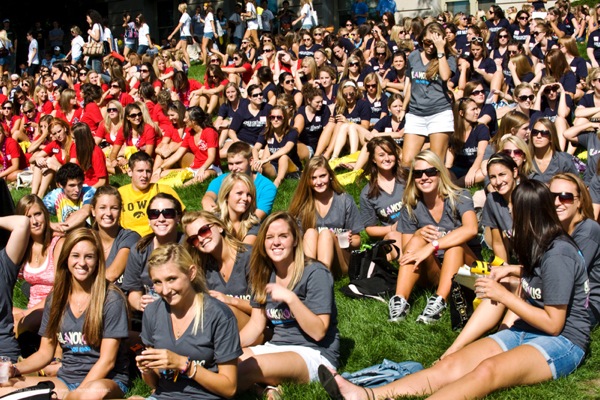 Fast Facts:
•"Iowa" is Native-American for "beautiful land."
•Iowa City's population is about 67,000; the 6th largest in the state. The metro area has close to 150,000.
•The University of Iowa was founded in 1847. The original Old Capitol Building adorns the center of campus (the state capital was in Iowa City 1842-1857; it was moved to Des Moines to be near the geographical center of the state.

•UI was the first public university in the country to admit women and men on an equal basis (1855)
•First public US university to grant a law degree to a woman (1873)
•US News & Report ranks UI as the 28th best public university (2012)
•100 areas of study; Student to faculty ratio: 15:1
•400 student groups
•The Fiske Guide to Colleges 2008 rated UI a "best buy", one of only two Midwest public universities so rated
•The University has about 30,000 students and over 100 areas of study. There are 1,700 tenured and tenure-track professors. UI employs 23,000 people.
•The UI Campus is about 1,900 acres, with 129 major buildings. There are 10 residence halls.
•UI Libraries rank among the top 25 public academic research libraries in the country, with more than 4 million bound volumes and 11,000 electronic journals licensed for use. 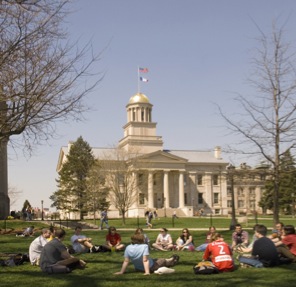 •There are 41 public parks in the Iowa City area.
•Iowa is not flat, as the stereotype would have it, but rather rolling hills and more woodlands than you might think.
•The nearby Coralville reservoir has 5,000 acres of water for recreation plus many trails for hiking and biking.
•ACT college testing services has its headquarters in Iowa City.
•UI has 3 radio stations: WSUI (910 AM) is National Public Radio (NPR); KSUI (91.7 FM) plays classical music; KRUI (89.7 FM) is student-run.
•UI has the #1 creative writing program in the country, the Iowa Writer's Workshop.

UI Facts at a Glance 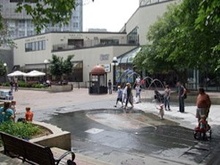 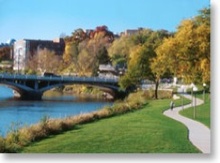 Take a virtual tour of campus if you've never been here before, and enjoy our slide show below of the campus and town. 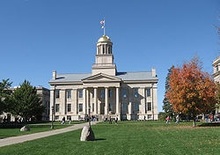 Web site of the city of Iowa City

A list of area accomodations is available here, here, and here, plus a sampling of restaurants, and things to do.

See also this list of restaurants and coffeehouses, many of which have online menus. 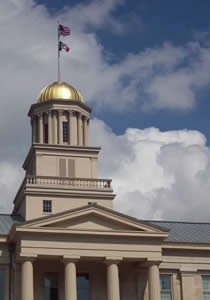 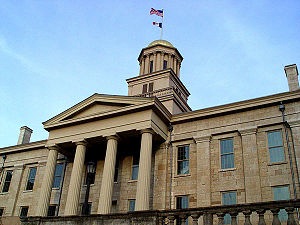 Newsletter for Parents of Students

The Coralville Reservoir (below) is only about 6 miles from downtown, and you can rent boats or swim at the beach. Lake McBride is also nearby. 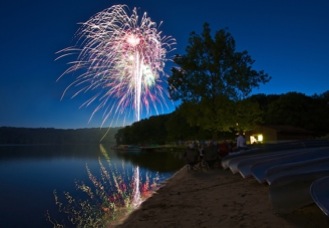